New homes for Lake Conjola residents in the aftermath of bushfires

Three Ingenia Lifestyle Lake Conjola residents who lost their homes in the January bushfires can begin healing with the arrival of their replacement homes – the first homes to rebuild in the Lake Conjola area.

Ingenia Lifestyle Lake Conjola Project Sales Manager Catherine Brasier said they have had the ability to reconstruct the homes exactly as they were before they were destroyed, and in the exact same location.

“We cleared the site in February and engaged a private contractor as soon as we could so that we could help Bob and Pat Prisk and Gabrielle McNeill rebuild their lives after such a devastating event,” Ms Brasier said. 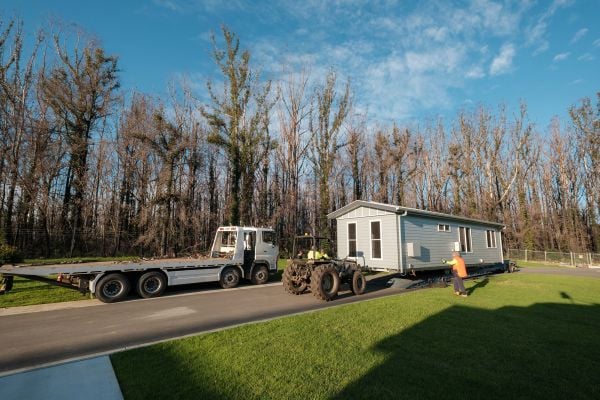 Cheers rang through the Lake Conjola community last week as the new homes arrived onsite. Six months on, the surrounding bushland is showing signs of regeneration.

For the Prisks, who have been living in the community for more than a year, the arrival of their new home is a chance to move forward after the devastation of the bushfires.

“We lost everything – we just walked out the front door with our little dog and the clothes on our back and that was it,” Mrs Prisk said.

“But you’ve got to be positive about it and look to the future. Everything will work out in the end – as long as we’re alive, that’s the main thing.

“We are now just waiting for the new house to be put right so that we can move in and start our lives again.”

The couple have been renting temporary accommodation at Ingenia Lifestyle that was provided fully furnished with essentials and have been surrounded by the support and compassion of their community.

“We’ve only known these people for about 12 months and the support has been absolutely fantastic – it’s unbelievable,” Mrs Prisk said.

Their neighbour Gabrielle McNeill had only been in her home for a week when it was lost to the fires and has been living opposite the Prisks in temporary accommodation.

“I took the offer of accommodation in the village – the thought of coming back was a little daunting but I thought I’d just be detached from the community if I stayed somewhere else, and I’d made the decision to live here, so I felt ok about coming back,” Ms McNeill said.

“The people in this Ingenia community, and others elsewhere, have been wonderful and so kind and thoughtful.” 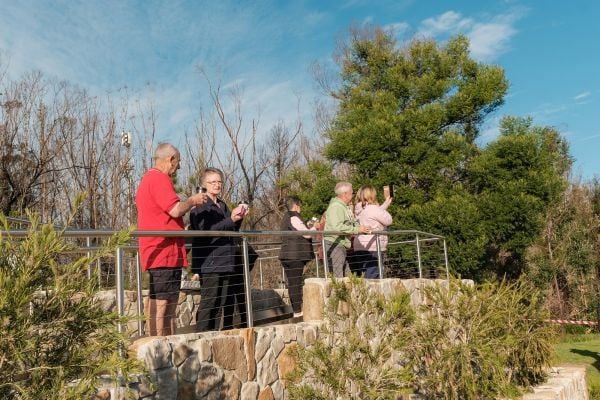 Ingenia’s Lake Conjola residents watch on as the trucks move through the house through the community. The charred trees in the background serve as a reminder of how close the fire came to the newly-built clubhouse that was used as a shelter during the firestorm.

With the day of the arrival of her new house, the reality of being able to have her own home again is beginning to sink in.

“It’s real! It does exist! It’s been terrific how quickly the replacement homes have come and although there were some delays with approval, it’s fantastic that it’s all systems go,” Ms McNeill said.

These homes at Ingenia Lifestyle Lake Conjola were just a few of the more than 176 homes that were lost in New South Wales south coast communities.

Ms Brasier said that the new homes were a sign of something far more significant for Lake Conjola.

“This rebuilding is the beginning of healing – not just for these residents, but for the broader community,” she said.

The story aired on WIN News across New South Wales and Queensland.

Rolling up the sleeves for those in need

From holiday home to forever home