The surprising secret to a happier (and healthier) retirement

Living well in retirement is about more than money, according to the latest research.

As a society, we prioritise accumulating wealth during our working lives – so it’s natural to assume that having more money is the key to a happier and healthier retirement. But research shows that another factor can make a big difference: the type of community in which we live.

What’s more, two-thirds of retirement community residents said their health had either improved or remained about the same since they moved in. And residents were two to five times more likely than non-residents to take part in fitness and social activities, including spending time with family.

It seems that living in a retirement community can do more than simply ward off the effects of getting older, and can actively enhance wellbeing and peace of mind. In fact, the residents surveyed were twice as likely as non-residents to strongly agree that they felt safe and secure, and 93 percent of residents felt there was a safety net in place if things went wrong.

In times such as these, that sense of safety has never been more valuable. In July 2020, shortly after the COVID-19 pandemic took hold, Australian researcher DCM conducted a survey of 60-to-85-year-olds and found that 43 percent were feeling an increased sense of vulnerability. Almost one-third said they felt isolated from family and friends, and 20 percent had experienced a reduction in savings for retirement.

During that same period, Ingenia Lifestyle conducted a survey of residents from its retirement communities and found that 90 percent of respondents had a positive, or very positive, outlook on life.

Just over half said they regularly attended Ingenia social events, and 91 percent said they felt a sense of connection within the Ingenia community.

Ingenia’s innovative financial structure was cited as a key reason that residents felt satisfied. Ingenia communities operate on a land-lease basis, meaning residents own their homes but rent the land on which they sit.

This structure keeps purchase prices down and allows many residents to apply for government rental assistance. It’s not surprising, then, that more than two-thirds of Ingenia survey respondents said they felt financially comfortable. Who wouldn’t sleep better with more money in the bank?

Ingenia’s financial structure has other benefits, too; the rental fee covers rates, community maintenance and gardening,  and security   – providing peace of mind. And, if residents decide it’s time to move on, there are no exit fees or deferred management charges, which means they keep any capital gains growth.

All three surveys suggest that many retirees prize a sense of control – for example, 90 percent of DCM survey respondents rated both “independence” and ”control over one’s life” as highly important. For prospective retirees who feel similarly, Ingenia’s flexible model is well worth considering.

2020 redefined how we live, prompting many people to reconsider what’s really important. While we all have different dreams and aspirations, there are a few values we all have in common – that’s the importance of community, finances and lifestyle.

Download your guide on how to plan for YOUR future. 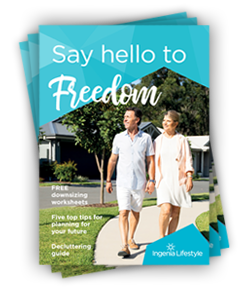 Access your FREE guide on how to plan for your future.

Construction kicks off on final homes at Nature’s Edge